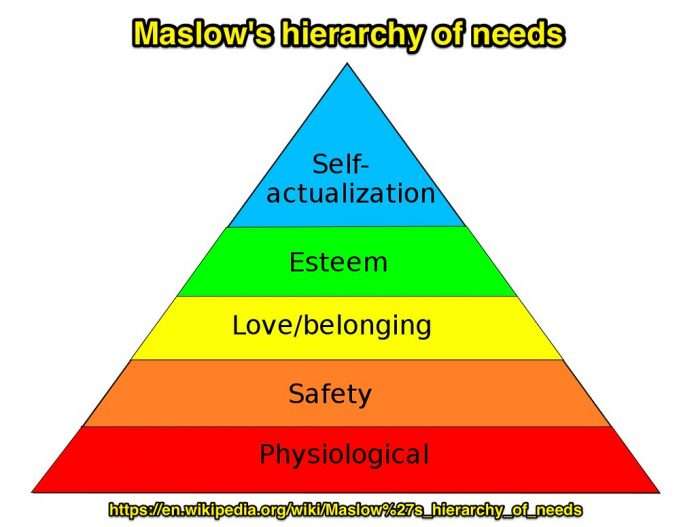 What is the interrelationship between Maslow’s “Hierarchy of Needs” and a Biblical Christian worldview? It is all a matter of perspective and priority in today’s American culture.

Maslow and our basic Hierarchy of Needs

Maslow was an American psychologist who wrote a paper in 1943 entitled “A Theory of Human Motivation”. I doubt there is a psychology class in the country that does not include his thesis at some point in the semester. His work has impacted developmental psychology, sociology, education, healthcare, and social work, to name just a few disciplines.

In simplest terms, Maslow postulated that the needs of mankind are based on what we already have, hence a hierarchy.

Though one can intermingle each of these goals, it is undoubtedly true that if someone is starving, one will likely have only a passing interest in “acceptance” much less the “arts”.

At the risk of making generalizations, today, America, is largely in the self-actualization stage of Maslow’s hierarchy. Recognizing that many in this country are undernourished and in need of the most basic forms of survival, on balance, we are a nation of comfort, perusing our life goals and desiring no one and nothing to get in the way of that. We don’t have a need for God’s intervention or interruption in our lives. We expect the government to take care of our safety needs while we pursue love, acceptance, and entertainment.

Joseph and the Famine – Biblical Christianity

In the Bible, Genesis 47:13-25, Joseph was Pharoah’s overseer of an Egyptian culture in the same state as America is today. They were, by far, the most powerful nation in the known world, and the population generally had all the basic needs of life. The arts and philosophy had become popular in a culture where its agrarian society owned private land, cattle, crops, and other forms of wealth. In addition, because of fulfilled prophecy, the Pharoah, their ruler, had been able to store up an abundance of food…

And then the seven years of drought hit, and everything changed rapidly.

No rainwater meant no crops, so, after the people had consumed all the food they had stored, they came to Joseph to buy provisions, paying in cash (Gen. 47:14). The next season they paid by selling their livestock (Gen. 47:17). Once the livestock was depleted, the people sold their land for food and, finally, became slaves of the Pharaoh (Gen. 47:19). Going forward, the land they farmed as the drought subsided was owned by the Pharaoh who received a fifth of all that was produced.

After all that loss, moving from Maslow’s “self-actualization” of pursuing personal comfort and life goals, down to the desperate “physical” needs of food and basic survival in less than seven years, one would think the Egyptians would be angry and demand that their prosperity be restored. But, instead, they were both complacent and appreciative of the Pharoah and Joseph for their survival as paupers and slaves.

Genesis 47:25 And they said, “You have saved our lives; may it please my lord, we will be servants to Pharaoh.”

Reflecting on the reality of Maslow’s hierarchy in light of America today and our future, within the context of ancient Egypt, I would like to offer 5 points to consider.

The Main Thing beyond Maslow

Truly our most pressing need is not even on Maslow’s “Hierarchy of Needs” list. God places a vacuum in the heart of mankind. We may try to fill that emptiness with a life full of toys, safety, entertainment, and relationships. However, the only One who can truly fill that void is Christ. And, all we have to do to bring Him into our lives is to ask Him and accept His Lordship.

For by grace you have been saved through faith. And this is not your own doing; it is the gift of God, not a result of works, so that no one may boast. – Ephesians 2:8-9

If you confess with your mouth that Jesus is Lord and believe in your heart that God raised him from the dead, you will be saved. – Romans 10:9

What I neglected to include in this post was a clear picture of the world in which this complacency is described.

I am talking about a world/America in total crisis, far beyond what we experienced with COVID. For example, a nuclear war, or a widespread EMP, an asteroid, etc. These and other broad, life-ending events, similar to what those faced back in Joseph’s time in Egypt, will bring mankind down the hierarchy of needs, making us accept any loss of property and freedoms, just to survive. The Bible predicts a catastrophic event such as this.

The worse the trauma, the faster and farther we will be willing to blindly become servants. COVID clearly demonstrated both the speed and trajectory.

The Apostles’ Creed vs. the Bible