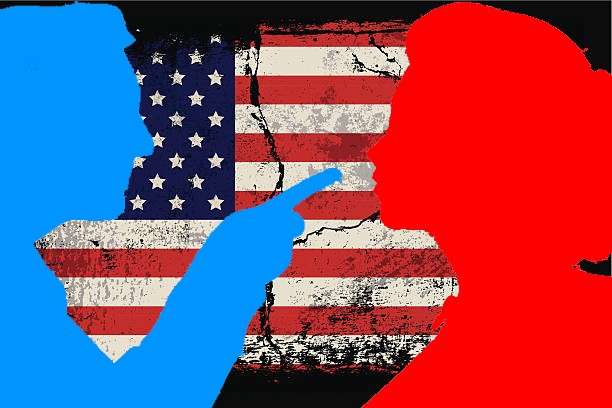 Oftentimes, we lump people together as either-or and we tend to put that in extremes. It’s a one-dimensional view of society that ascribes people a position based upon their political ideology, based largely on party registration. If you’re not in line with Democratic talking points, you must be an alt-right ideologue. If you don’t agree with the GOP platform on many points, then you’re a leftist/communist/socialist. Common ground stands somewhere between the two extremes, but the bipolar, single-axis nature of left versus right makes it extremely difficult to find common ground. You’re not allowed to be a moderate.

You must be one or the other and overlap is suspect. This is why I’ve never been a member of a political party because I don’t see the world in such uni-dimensional ways.

I don’t speak for all libertarians. Libertarianism is a highly individualistic philosophy. The joke goes “Ask five libertarians their opinion on X and you’ll get six different answers.” We have our own factions, though often less polarized than the partisan polarization that has taken over the mainstream dialogue. This is how I was introduced to libertarianism.

Libertarians see the world in a multi-axis way. A simple diagram of it might look like this.

We don’t see the world on a single political axis with left Democrat on one end and right Republican on the other as if they are polar opposites. Libertarians see the world in two dimensions— economic freedom and personal freedom, which might influence your political choices.

On the Personal Freedom index, the least amount of personal freedom is found in authoritarian ideologies, while the most amount of personal freedom is the domain of liberalism. While Americans are seriously confused by the use of that term “liberal”, it doesn’t mean Democrat or even liberal spending from the government coffers. It originally meant those who believed in liberty or self-governance as opposed to the monarchy, which is a pretty authoritarian organization.

Authoritarian regimes fear their subjects having freedom because they might do something unauthorized with that freedom, so they have rules that dictate what you can say, who you can associate with, where you may go, and what the press is allowed to report on. They especially deprive their subjects of the means to stand up for themselves against the government because — well, all the authority rests with the government, and people are seen as not having rights beyond the privileges the government allows them at any given time. The opposite of authoritarianism is libertarianism where the government is small and non-obtrusively and the people are “sovereign”.

To be consistent with economic freedom, institutions and policies must allow voluntary exchange and protect individuals and their property. Governments promote economic freedom by providing a legal structure and a law-enforcement system that protect the property rights of owners, enforce contracts in an even-handed manner, and refrain from taking people’s property and interfering with personal choice, voluntary exchange, and the freedom to enter and compete in labor and product markets.

The diagram’s creator wanted to show partisanship, so he included a large square in the middle for centrist ideology. Centrism is a political outlook or position that involves acceptance and support for a balance between social equality and a degree of social hierarchy while opposition political changes which would result in a significant shift of society strongly either to the left or the right. Both center-left and center-right politics involve a general association with centrism combined with leaning somewhat toward their respective sides of the left-right political spectrum.

Adherents like to see a high degree of political compromise and want to see the government doing something, anything. Centrists and libertarians often take similar views in political discussions, but centrists often collaborate with authoritarians, which is a non-starter for many libertarians. Note that a corner of the libertarian sector is taken up by centrism.

These are likely left-libertarians and some political libertarians who are willing to compromise to gain the social programs they believe are necessary for modern society or to achieve political strength.

Where Do Libertarians Stand?

The media often puts libertarians over to the right with the Republicans, but that’s their uninformed analysis of our beliefs and not an accurate portrayal of libertarian philosophy. For the great majority of libertarians, the political teeter-totter has the Democrats and Republicans over on the other side of the fulcrum in comparison to us. The opposite of libertarian is authoritarian.

Kind of in the names, you know?

These days, civil libertarians see the Democrats as being more authoritarian than the Republicans simply because Democrats want a large, intrusive state that interns people who refuse to get an experimental medical procedure that doesn’t appear to work as advertised and they support the government regulating speech in what has become the modern public square — social media. Republicans don’t.

That doesn’t make GOP members into libertarians, but it does mean they’re less authoritarian than Democrats.

A lot of libertarians who remember the 1960s are stunned and saddened by that change of attitude. We could be Kennedy Democrats, but we can’t be Ocasio-Cortez Democrats, so instead, a lot of us are Rand Paul Republicans

On a whole host of issues, libertarians aren’t likely to agree with either the Democratic or Republican Party. While we agree with Republicans that government is oversized and too expensive, Republicans are stunned to realize that we also think the US can do with a substantially reduced military and shouldn’t have troops stationed in almost every country on the planet.

That also freaks out Democrats when they realize we don’t support choosing sides in wars and stepping in to play referee or, worse, fighting for a chosen side. Democrats fear genocides if American troops aren’t involved. Libertarians think our presence is what causes the genocides.

Most libertarians agree with Democrats on many social issues, if not personally, politically. Libertarians support legalizing drugs, gambling, and prostitution because we believe individuals can make those decisions themselves, but also because legalization eliminates government involvement in individual lives. While many libertarians have no objection if homosexuals want to marry, some of us would prefer the government got out of the marriage business altogether.

The government shouldn’t be involved in personal decisions among adults because adults don’t need government guidance in what to do with their own bodies, souls and living arrangements.

Again, this may be indicative of the current GOP attitude of being less authoritarian than the Democrats. Republicans may not agree with every jot and title of individual liberty, but Democrats disagree with it unless it involves lifestyle choices like sex and drugs. And that makes all the difference.

Libertarianism has a wide range of opinions, but by and large, they come down on the side of people being able to make their own individual choices about almost everything.

Lela Markham is an Alaska-based novelist and blogger who views the world through a distinctly libertarian lens.

Does Satan Know Your Name

Living God’s Dream Marriage or Enduring His Curse? (Part 4 of 4)