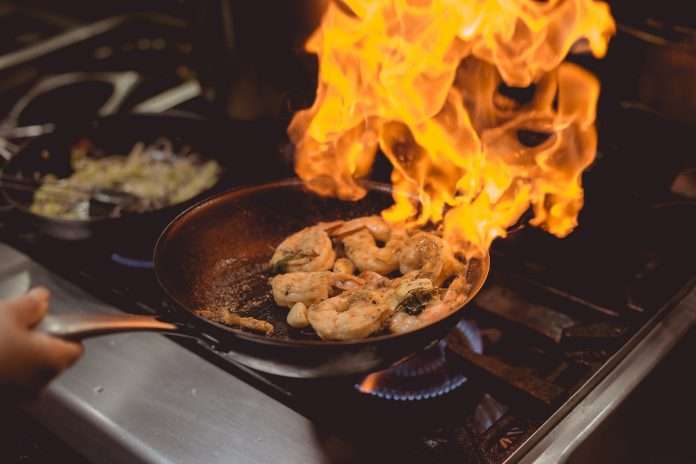 Our verse for today comes from John 19:34, “But one of the soldiers pierced His side with a spear, and immediately blood and water came out.”

I remember this line from a movie where the main character was in a tight spot at the hands of the villain.  Unexpectedly, help appeared to arrive in the form of the chief of police.  But when the hero says, dry and sarcastically, “Thank god, the . . . police,” we realize that this dirty cop is the last person he wanted to walk in with a gun.  Now, instead of one bad guy staring him down, there were two.  That scenario seems to embody the sentiment expressed in the phrase, “Out of the frying pan and into the fire.”  Caught in this sort of lose-lose situation, albeit hopefully not as life threatening, we’d probably be inclined to say things like, “Thanks, for nothing,” or “Next time, don’t do me any favors.”  And so I have to wonder about the tone that John had as he related that Jesus didn’t have to have His legs broken, because He was already dead.  He only got a spear stabbed into the side of His now-still chest, spilling out the blood that washed away the sins of humanity.  Thanks for sparing the legs, but dying and then getting pierced is a high price to pay to keep your bones in one piece.

We’re so familiar with the story of the cross and resurrection, that sometimes we lose sight of the fact that those who crucified Jesus couldn’t have cared less about Him.  The soldier who didn’t get to break His legs probably complained about getting gypped out of his favorite part of the whole thing.

We’re also really familiar with the ways that we like to do and not do things.  So much so that we don’t realize that we are killing ourselves to avoid having our legs broken.  We are claiming righteousness or superiority over another sort of person that might generate stares or whispers, but all the while we are standing in the fire of our pride or some other transgression that we wear so comfortably.  The blood that poured from Christ’s side may have spilt onto that soldier’s hands or brow, but unless he bowed his heart unto the Lord before his life came to an end, it meant nothing to him.  And unless we totally surrender to Christ, staying in the frying pan over the fire won’t mean much more to us.

As we seek Him today, choose neither the frying pan or the fire by confessing to God that you deserve both of them, and so much worse.  Then let His grace change in you what you never realized needed changing.

Share
Facebook
Twitter
Pinterest
WhatsApp
Previous articleDon’t Get Caught Up In Being One Of The Many, Unless The Many Is Drawing You Closer To The One
Next articleNational Day Of Prayer – Then And Now
RELATED ARTICLES
Devotion

God has Authority Over Your Life