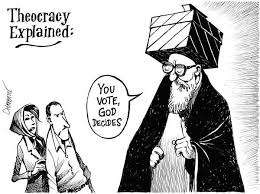 The reader below responded to one of my posts on our Biblical Christian Worldview. She coined a new term to describe me (and others) who she feels are intending to take over the world with our narrow, authoritative, legalistic viewpoints. Her earlier note to me included a reference to Christians as desiring to become like ISIS in our demand for control of America (which she referred to as Biblical Law similar to Sharia Law).

The words in quotes are from her second, and I suspect final note. For clarification the referenced Matt Shea is a wacko, ultra-conservative fringe individual who I am being lumped in with. He believes, for example, that God hates Jews and women…. Yes, there are crazies on both sides of the coin.

Catherine, if I could respond to your comments one-by-one…

1. “christofascist dominionist theocracy” – Wow, ignored your use the first time but… I like new words… our liberal folks are sure creating a lot of them these days. Some come back to haunt them, like “Woke” and “defund the police” but cool nonetheless. Anyway, I checked Google and it looks like your combination of these three words is unique. Its meaning, however redundant, is obvious.

So, how did I do on the definition? To respond… to some degree, I agree that parts of your new word would be a plus for this country… Of course, I don’t agree with Matt Shea (checked him out… a loon regarding the Jews, among other points) but with the concept of how this country was a Christo-Theocracy in the past… but not so much today and deteriorating quickly into a deeper and deeper post-Christian nation. I don’t think Biblical Christians have anywhere near the representation in government as we used to. I think it’s safe to say that (with some honest perspective) you needn’t worry about the takeover of this country, or the world, by Biblical Christians. We are not devolving “into… draconian measures to force Biblical Law” on Americans. It’s all pretty clear that this country is headed in the exact opposite direction. I wrote an article on the recent change in the direction of this country which lists several trends that are definitely not Christo-Theocratic. However, if we are in the End-Times, then all bets are off and God Himself will make His point clear as to who is in charge. God will complete your new phrase, imposing His will on the world in a Dominionist-Fascist way, there is no doubt. More importantly, I am sad to say it will be a very hard lesson and surprise for a great many people when that does, in fact, happen.

2. You (Catherine) are comfortable with the “basic tenets common to all the major religious traditions in the world… The 10 commandments”. – I have a theory on that… I think God placed basic moral ethics into the heart of man, and even false religions have incorporated it into their theology. Part of how we see a God in creation can be traced to that premise.

3. “The supernatural stuff is unnecessary.” – I get that. It’s great to hold whatever beliefs you feel at present in your life without regard for a supernatural God imposing His will in those areas where you and He differ. One can just see Jesus as love and caring while accepting concepts like abortion (not putting words in your mouth, just saying) without any issues with pesky cognitive dissonance. Romans 1:22 (“wise become fools”) comes to mind.

4. “Evangelicals make the arrogant assumption that Christianity is the default belief system. It’s not.” – Yes, it is, but God will have to convince you of that. I pray He will.

5. “I also find it odd that evangelical Christians are so ready to tell me all about their beliefs, but never ever have any curiosity about what I may believe.” – I can answer this one for you. It’s because Biblical Christians see the edge of the cliff (death) and care enough about you to try to offer a solution before you jump. Once you are in the air (dead), it’s too late to be saved.

6. “I see the war, torture, misery as religion uses its influence to give permission to ‘smite’ others.” – I agree. There were a lot of atrocities committed in the name of Christianity. I don’t think that is the case today, but recognize my perspective may be clouded.

7. “…Matt Shea has outlined for the rest of us, should he succeed in creating his dream of a Liberty State. It would be hell on earth for women, LGBTQ, POC, and those of minority faiths.” – Again, much of what he believes is at the fringe of the fringe. The social media landscape is so vast these days that anyone (even me) can have a voice that can be quoted and used as gaslighting for the opposing side. It is part of the sad state our country is currently in. More and more speak from the extremes and have their tribal followings that prevent honest, reasonable dialogue.

Anyway, I appreciate your thoughts and comments. My underlying hope is that someday (as crazy as it may sound) you will see the truth in a Biblical Christian Worldview.

For those living in a Christian bubble while reading the above, please know that Catherine’s views are not at the fringe of atheistic theology. Nor is her venom unusual for those desiring to exclude God from their lives. The quotes from her post are typical of responses from those antagonists brave enough to put their views in writing. In fact yesterday I received a long response to one of my posts that was so strong and so confrontational it was retracted, either by the author or from the posting site we mutually use.

As Biblical Christians we can see a wave of change coming to our country. It holds significantly less tolerance for many of our core beliefs. However, over the past year I have dug deeper and deeper into the undercurrent of these trends. What we see in the news and on open social media platforms is a sanitized and moderated version of many of those who wish to destroy our faith. I have come to believe that most of us see the top of the iceberg but miss the larger force just under the surface of the water.

Opening — How to Build a Good Foundation