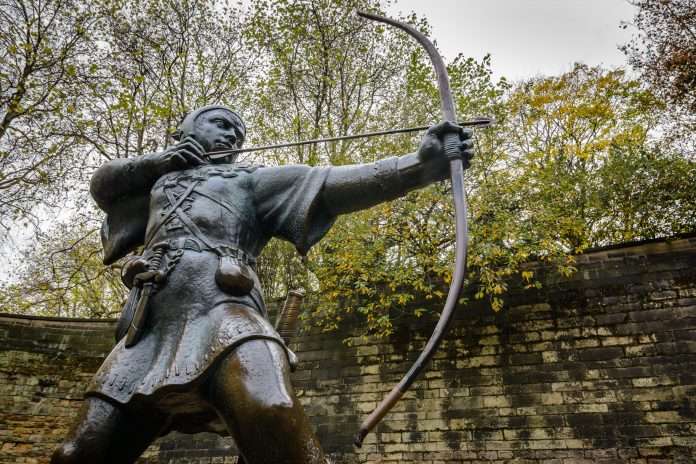 Our verse for today comes from 2 Kings 1:3, ” But the angel of the Lord said to Elijah the Tishbite, ‘Arise, go up to meet the messengers of the King of Samaria, and say to them, ” Is it because there is no God in Israel that you are going to inquire of Baal-Zebub, the god of Ekron? ” ‘ “

I rather enjoy the legend of Robin Hood and the various forms in which it has been told. My favorite rendition is the Looney Tunes version, starring Daffy Duck as Robin and Porky Pig as Friar Tuck. If you have never seen it, the full version on YouTube is well worth the five minutes. As you know, Robin makes a name for himself by stealing from the rich and giving to the poor. Much of what he takes is acquired by intercepting travelers as they make their way through Sherwood Forest. Through the surprise attacks of Robin and his band of Merry Men, they relieve the helpless traveler of their money and send them on their way. Now, Elijah was no rogue outlaw or vigilante, but on this one particular instance, God did send him to intercept some travelers who were on an errand for the king. Ahaziah had fallen from his upper room and been injured, and so he sent messengers to the cult prophet Baal-Zebub to find out if he was going to survive the accident.
They surely travelled with significant funds to secure the answers from the prophet, but Elijah was not interested in the money. God had sent him to deliver the bad news to Ahaziah, informing him of the death sentence he had secured for himself by trusting in the meaningless words of a dead god rather than in the living God of Israel.

Meaningless. Dead. That’s what Ahaziah was banking on, was building on each day. Do you see any of yourself in there at all? Are you relying on what is ultimately unreliable? Are you valuing the tools instead of the Craftsman Himself? Fortunately, God is seeking you, intent on intercepting you and delivering you from your wayward journey. He wants you to seek Him, when you’ve fallen and are afraid, and when you’ve succeeded and basked in glory. So act no longer like there is no God in Israel, and stop going to the god of Ekron. That daily visit can cost you more than your money or possessions, while the One who loves you is worth more than all your money and possessions.

As we seek Him today, name the Baal-Zebubs in your life for what they are. Don’t waste another day of life pursuing what is dead. Gladly surrender what you do not even possess.

Share
Facebook
Twitter
Pinterest
WhatsApp
Previous article
Disney’s  Next Step Toward the Abyss
Next article
Those who limit their theology to “love thy neighbor” blend in with society, but not with Christ.
RELATED ARTICLES
Devotion