Fulfilled Prophesy and the Atheist – Part 1 of 2 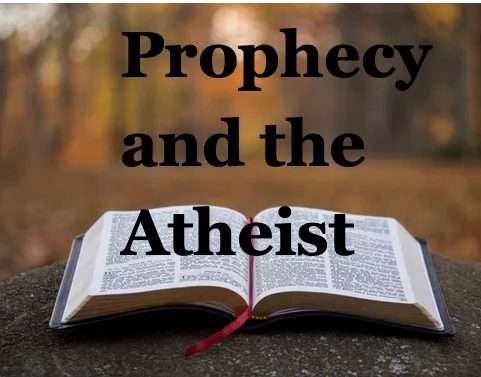 This two-part article results from a simple and reasonable question I was asked by an author who holds very different beliefs than I do. He writes voraciously on the deconstruction of Christianity, coming from a deep and thoughtful understanding of Scripture, and its impact on our culture. As a regular responder to his popular blog, he asked me for the “very best example [of a] prophecy that verifies that the Bible has had a supernatural influence”. Below is my response in part one of “fulfilled prophesy”. Part two will be my testimony, from an Atheist to a Biblical Christian.

Of course, there are hundreds of OT prophesies fulfilled by the NT which “Christian” theologians use as evidence of the reality of an omniscient, omnipresent, omnipotent God of the Bible. Due to the sheer number, many writers narrow in on just those Old Testament prophesies which are fulfilled by Christ’s arrival.

Look to Many, Not One

Many of these “fulfilled prophecies” are disputed, twisted, and discredited by anti-Christian “theologians”, which is certainly appropriate and to be expected. So, the defensive response from Biblical Christians has typically been to look beyond individual prophesies, and also defend the sheer magnitude of examples, as evidence that the Old Testament made predictions that were fulfilled in the New. Often math is used to make their claim on the nearly infinite probability of just a few of the many references (above) being fulfilled in the New Testament and well-documented historically.

“Unique among all books ever written, the Bible accurately foretells specific events in detail, many years, sometimes centuries, before they occur. Approximately 2,500 prophecies appear in the pages of the Bible, about 2,000 of which already have been fulfilled…”

Becoming struck by lightning = 1 in 700 thousand

The same as pulling a single, painted dime from a pile which filled a bucket the size of 10 earths.

So, again, to just pick one prophetic OT verse and make a case on Biblical divinity, is certainly a reasonable request, but does not speak to the compounding magnitude of fulfilled prophesy, which is overwhelming and really the point of the Biblical Christians’ perspective on the matter. I would, therefore, prefer to cop-out on your request for a single verse and defend my position of fulfilled Scripture based on the already referenced quantity, rather than individual quality.

However, if forced to offer a verse(s), I would offer the following two:

Fulfilled – Micah wrote this approximately 800 years before Jesus was born in Bethlehem (Matt. 2:1). In Matt. 2:16 Herod thought enough of the prophesy that he had all male children killed in Bethlehem, (a very small, back-water town), concerned over the baby Jesus becoming competition for his leadership. Even this action was a prophesy fulfilled from the Old Testament (1 Kings 8:12). Further, the Jews contemporary to Jesus, knew about the prophesy, documented in John 7:42. This verse also references Christ’s human lineage as the fulfilled offspring of the line of David (2 Sam. 7:12-16).

Psalm 22:16-18 For dogs encompass me; a company of evildoers encircles me; they have pierced my hands and feet— I can count all my bones— they stare and gloat over me; they divide my garments among them, and for my clothing they cast lots.

Belief is not Salvation

Setting aside the miraculous, supernatural nature of fulfilled prophesy, I believe that apologetics (defense of Scripture through observable evidence, like fulfilled prophesy) is not saving faith. One can believe that Old Testament prophesies have been miraculously fulfilled in the New Testament, but remain destined for eternal separation from God. Ultimately, in my own life, there was a point where I accepted the inerrancy of the Bible, intellectually, but had not yet accepted Christ into my heart, and consequently remained unsaved.

The process of how a very stubborn, self-reliant atheist came to be a “born-again” Biblical Christian, follows in Part 2 of this two-part series.