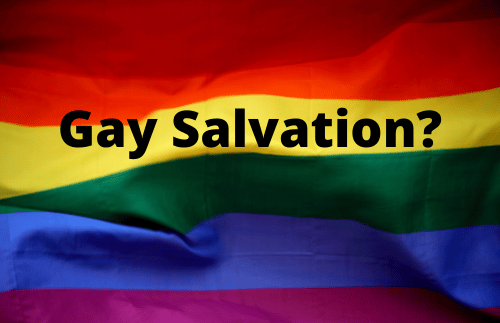 An illustration from a Reader asking for an opinion.

The question… “A gay person lives a promiscuous life full of partying and living for self. He then gets saved. As is usual in this situation, the saved man stops partying and starts trying to live more for others. Since most Christians say that he has no choice but to be celibate if he can’t marry the opposite sex, he tries celibacy for a number of years and is miserable. He decides that, in his heart, there is nothing wrong with a committed gay relationship. So he is now in a marriage, but still works for others and keeps his body free from drugs and alcohol. He finds peace and happiness and a true joy for the Lord. In his mind, his choices are supported by Paul’s teaching. Do you think this man gets to go to heaven?”

Excellent thoughts. I spent many years interviewing and hiring pastors for a large Christian ministry. One of my questions, used to dig deeper into their underlying theology, was to ask…. “Can a practicing gay person go to Heaven?”

I will not offer the ratio of those “theologians” who said yes vs. no but if they said no, they would not go to Heaven, I pounced.

I asked them, well do you know a pastor who is overweight? Always getting a “yes” answer, I reminded them that our bodies are a temple to the Holy Spirit (1 Cor. 16:19-20) and therefore gluttony is a sin. Scripture makes the point even clearer in verses such as Prov. 23:20-21 and Prov. 28:7.

So, I continued… is that overweight pastor going to Hell as well? Does one type of sin (other than the unpardonable sin – beyond this conversation) send one to Hell when another does not? Could the gay person be struggling with their sin like the pastor is trying to eat better to improve his Holy Spirit temple? Could the gay person be new in the faith and not yet understand God’s view on the matter? Could he be going to a church that supports a gay Christian theology by the staff, based on their interpretation of the Bible and, therefore, doesn’t see an issue?

Digging into the Specifics

So, to answer your question from my perspective, I believe the Bible is clear that homosexuality is a sin. I also believe gluttony, lying, theft, anger, envy, pride, foolishness, etc. are sins (Mark 7:21-23). Christians do not leave sin behind when we are saved. Paul laments over this principle when he says,

Biblical Christians are sinners before and after salvation. That is a major reason why unbelievers discount us so much. We are truly a mess.

Clearly, some unbelievers act much more like Christians than Christians do.

Christ saved us from the penalty of our sin, both those before we were saved, and the sins we commit after we are saved. It may seem unfair, but that is the way the Bible reads. Man is saved by God’s grace alone, through faith in Jesus Christ alone, not by being good people (Eph. 2:8-9). Look at the thief on the cross next to Jesus when He said, “today you will be with me in paradise”, yet the man could do nothing to “earn” a place in Heaven as he hung on the cross (Luke 23:43).

Comparing a Christian’s behavior against a nonbeliever is unreliable as an indicator of a changed heart (salvation) because there are example after example of nonbelievers acting more Christian than Christians.

Back to the Question

So, to your illustration… the gay person who gets saved tries to live a celibate life for “a number of years” and, he is miserable. This is like the kleptomaniac who tries not to steal (a sin) but ultimately fails. In my view, it comes down to a matter of the heart. And, matters of the heart are not, and should not be, discerned by outsiders who have to look through the plank (sin) in their eye before pointing out the speck (sin) within their kleptomaniac neighbor’s eye (Matt. 7:3). To be specific, the man who has a compulsion to steal, and does so, sins. In his heart, (through the Holy Spirit as his Counselor) the question is, does he accept the fact that his action is a sin? Does he feel compelled to ask for God’s forgiveness, and, does he try to repent or turn away from that sin? Or, instead, does he have a calloused heart? Has he “deconstructed” his faith to the point that he is perfectly comfortable falling back into taking what he wants, when he wants, from others?

Those are the questions I would ask the LGBTQ person in your example to reflect on. I would suggest however, the way you described this person… “saved” and trying to resist for “a number of years”… I would say his return to a gay lifestyle would have caused him sadness and strife as God and the Holy Spirit convicts him.

Again, however, this is a matter of the heart and it is between this man and God, and not for Others to judge.

Finally, to your statement that the man, back with his partner now, has a “peace in his heart”. I would respectfully counter, based on my points above, that if he is truly saved, his heart should remain in conflict, similar to Paul’s in Romans, quoted above. If his heart is at peace (as your example suggests) while engaging in what the Bible (and therefore God and the Holy Spirit) see as sin, then I would be concerned. My exception to that concern, as already stated, would be if he was in the early stages of his spiritual growth (1 Cor. 3:2) or in a sanctification (growing in Christ) environment where a gay lifestyle was incorrectly considered Biblical. But again, having said all that, this is ultimately a matter of the heart, between this man and God. We are all sinners and we all fall short of the glory of God (Rom. 3:23). That’s why Jesus had to come rescue EVERY one of us from the penalty of eternal death. We are all sinners who fail continuously, but God’s grace washes us all clean.

So, yes a practicing gay person, like any other sinner, has an opportunity and the right before God to be saved and spend eternity in Heaven. It’s all a matter of the heart and God’s grace alone through faith in Jesus Christ alone.

It may be poor etiquette to add to a post once published but, I have more to say on this subject. The first two points below represent my personal opinion, which I recognize remains either unspoken by many of my “tribe” or they are outspoken in their disagreement. The third point is obvious and should have been more clearly emphasized in the original post.

First, I believe there is a biological component to homosexuality. I’m not going to waste time referencing “experts” on the subject. We all can make and defend our own decisions on the matter. However, to my point above, I also believe there is a biological component for “gluttony, lying, theft, anger, envy, pride, foolishness” and, of course, “kleptomania”. However, just because we all have urges that can be traced to both nurture AND nature, this does not remove them from a list of Biblical sins. Our sin nature permeates both nature and nurture. For example, I believe there is a biological predisposition toward alcoholism, but much of the behavior that can come from a drunk, still remains socially unacceptable and sinful. Resisting the urge to lie, get angry, steal, overeat, and yes, engage in an active gay lifestyle, is a Biblical mandate. However, we are all attracted to one or more of these sins because of both nurture and, in many cases, nature. The difference between ‘attraction’ and ‘behavior’ is, for the Biblical Christian, a matter of listening to the Holy Spirit in our lives.

Second, how many of us (Biblical Christians), if given the chance, would rewrite a few passages in the Bible to better conform to our predisposition? I suspect for many, this issue would be near the top of the list. Why do we have to battle with the world on the subject of homosexuality? Why did God make it a sin such that twisting/ignoring Scripture is the only path out of the conflict? We can all guess at the answer but the truth is, it’s a mystery to be answered on the other side of the grave. My point is that as society yells louder and louder at us for our interpretation of the Bible, we need to remind ourselves, and gently remind them, that we are not the ones speaking this difficult truth. It is God Himself making these statements through His Word.

1 Peter 4:8 Above all, keep loving one another earnestly, since love covers a multitude of sins.