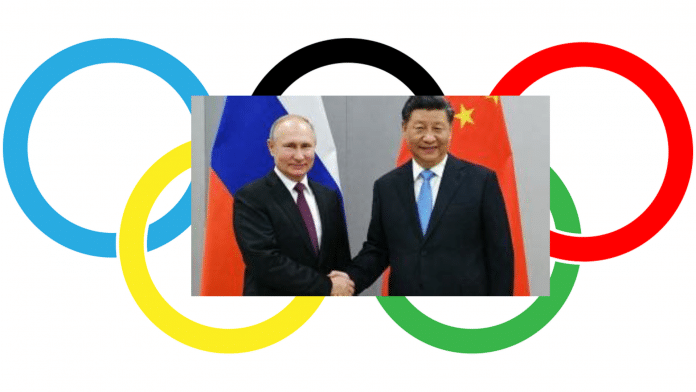 The 2022 Winter Olympics, held in Beijing China can be viewed from many different angles. Most have to do with politics, human rights (Uyghurs genocide), COVID (Wuhan & lockdowns), global warming (all man-made snow), and, of course, it’s the pinnacle of winter sports. But what about something as benign as the song “Imagine” from the opening ceremonies? I would offer an observation that underlying all of the pomp and ceremony runs a current of globalism and a New World Order that speaks directly to Scripture. From the Sidney Morning Herald,

“Xi used the ceremony to cast China as the “credible, loveable, and respectable” leader of a new world order.”

Short of war, there are no other events in history when large numbers of countries come together in a public way to challenge each other. Institutions like the United Nations meet in private with very little exposure to the world population. So, the Olympics offers a rare and unique opportunity for those who wish to send a message across cultures and nations.

Interestingly, one repeating theme, dating back to the 1996 Atlanta Games closing ceremonies, is the use of the John Lennon song, “Imagine”, the most successful single of his solo career. It was used again in the 2006 Winter Games in Turin, the 2012 games in London, the 2018 PyeongChang games in South Korea, and, most recently in the 2021 Summer Games in Tokyo. Savannah Guthrie made the following statement after “Imagine” was used in the PyeongChang games of 2018, “If the games were a song, ‘Imagine’ would be the song.” Aside from the whole countries-competing-against-each-other bit, sure!”

In 1980, John Lennon offered insight into what inspired him to write the lyrics. He gave credit to Dick Gregory, who gave him and Ono a “Christian Prayer-book”*. Quoting Lennon,

“The concept of positive prayer…If you can imagine a world at peace, with no denominations of religion – not without religion but without this my God-is-bigger-than-your-God thing – then it can be true… The World Church called me once and asked, “Can we use the lyrics to ‘Imagine’ and just change it to ‘Imagine one religion’?” That showed [me] they didn’t understand it at all. It would defeat the whole purpose of the song, the whole idea.”

Lennon later confirmed that the song also had a deeper meaning for contemporary society by saying,

“The similarities between his [Lennon’s] ideals set out in the song and Communism were indeed deliberate: “‘Imagine’, which says: ‘Imagine that there was no more religion, no more country, no more politics,’ is virtually the Communist Manifesto, even though I’m not particularly a Communist and I do not belong to any movement.”

Jimmy Carter, a professing Christian, made the statement that “…in many countries around the world — my wife and I have visited about 125 countries — you hear John Lennon’s song ‘Imagine’ used almost equally with national anthems.”

The Lyrics and Meaning of “Imagine”

What does a hugely popular song, written in 1971, yet still sung around the world and used in world ceremonies to this day, have to say to us? Below are the lyrics.

Imagine there’s no countries
It isn’t hard to do
Nothing to kill or die for
And no religion, too
Imagine all the people
Living life in peace… You…

There are 5 themes presented in the song that fit perfectly within the framework of:

If Communist China was to pick an American song to feature in the 2022 Winter Olympics, a gathering of all nations, what better song to pick?

The theme of the 2022 Olympics, highlighted during the opening ceremonies was, “One World, One Family”, the motto being “Together for a Shared Future”. It was represented by “a single snowflake and was central to the showpiece from beginning to the end of the Ceremony”. Interestingly, the last time the Olympics was in China, in 2008, the theme was “One World, One Dream”.

Does the Bible Have Anything to Offer?

The short answer is, yes, a great deal.

Most Bible scholars see the coalescing of the world into a single form of government, initially ruled by a ten-nation confederacy (Dan. 2:41-42), which will ultimately be controlled by the Antichrist. They will have control over “every tribe and people and language and nation” (Rev. 13:7). This will be accomplished by controlling all commerce through the use of a one-world currency that can only be accessed through, what will likely be an embedded chip in our hand (Rev. 14:12-14).

As described in Revelation 17:1-18, a single unified religion is depicted by “the great harlot”, which is used throughout the Old Testament as a metaphor for false religion. Today we see religions throughout the world continuing to water down their beliefs to accommodate our changing culture. It is not hard to imagine a time when most of the major denominations collapse into a broad ecumenical, “all roads point to God” form of false theology.

There is no question there exists a broad valley between using a one-world song, “Imagine”, in the Olympics, and the end of civilization as we know it. No one would suggest a cause and effect. However, it should not miss our attention that there are trends and forces in this world which suggest America is faltering and China is growing in power and influence. Their recent alliance with Russia, their expansionist intentions in controlling European energy, Taiwan, chip manufacturing, rare-earth monopoly, and other economic advancements only add to an impending trend. The US and the world seem to be turning toward Socialism, a precursor to Communism while democracies are on the decline.

“Behold, I am sending you out as sheep in the midst of wolves, so be wise as serpents and innocent as doves.”

We need to tell those who wish to hear, the Good News of Jesus Christ. He is the only one who can offer eternal hope for all who accept Him as their personal Lord and Savior. John Lennon, similar to the Rich Man in Luke 16:24, 27-28, now knows the truth about Heaven and Hell. Yet God desires,

1 Timothy 2:4 …all people to be saved and to come to the knowledge of the truth.

Each of us must take that step toward Him, AND acknowledge we are sinners.

From Romans 10:9, if you, confess with your mouth that Jesus is Lord and believe in your heart that God raised him from the dead, you will be saved.

China and the New World Order are headed our way. Are we going to be eternally secure and ready for what’s to come?

Closer as a Family