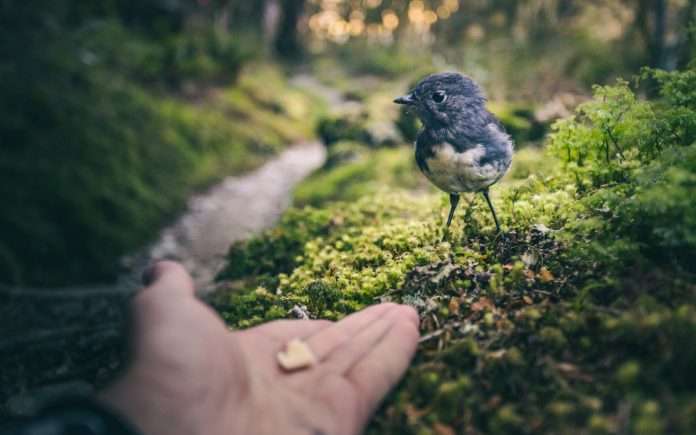 We never outgrow the need to trust God. In fact, as Jesus said:

This was brought home to me recently as I was reading the account of Israel’s time in the wilderness. Numbers 20:12 says:

But the Lord said to Moses and Aaron. ‘Because you did not trust in me enough to honor me as holy in the sight of the Israelites, you will not bring this community into the land I give them.’

Gulp, even Moses and Aaron failed in their trust of God, and paid a heavy price for it. So, what chance do we have? No chance at all, humanly speaking, but thanks be to God, we are not under law but under grace. Our failures, our sins, our lack of trust, have been paid for by Jesus’ sacrifice. Nevertheless, there is much that we can learn from this incident.

The Israelites were in a desert and there was no water, so they complained to Moses. They did more than complain, they quarreled with him, and blamed him, as they had done many times before. So Moses and Aaron went to God, fell face down before him, and the glory of the Lord appeared to them.

The Lord said to Moses, ‘Take the staff, and you and your brother Aaron gather the assembly together. Speak to that rock before their eyes and it will pour out its water. You will bring water out of the rock for the community so that they and their livestock can drink.’ (Numbers 20:7,8 NIV)

Moses and Aaron did as the Lord commanded, except for one thing, instead of speaking to the rock, Moses struck the rock twice with his staff. Water still gushed out of the rock, but the Lord rebuked Moses and Aaron.

This raises a couple of questions: why did Moses strike the rock; and why did the Lord discipline him for it?

Why Did Moses Strike the Rock?

We are not told precisely why Moses struck the rock, but we do have some clues. Firstly, there’s what Moses said to the people:

This suggests to me that Moses was angry with the people, he called them “rebels”. Perhaps he was fed up of being the lightning rod for their complaints, when all he was trying to do was serve God and them, a feeling perhaps familiar to many leaders and pastors. He never asked for any of this.

Moses was acting out of anger, and when we do that, we tend to make mistakes and do things that we regret. Perhaps in his anger he did not listen carefully to God.

But secondly, and more importantly we have what God said. In God’s opinion, Moses struck the rock because of a lack of trust, “… you did not trust in me enough…”. As always, God looks on the inside and knows our motives. Did Moses therefore doubt that just speaking to a rock would bring water out of it? The first time that God used Moses to bring water out of a rock, he did in fact command Moses to strike it:

The Lord answered Moses, ‘Go out in front of the people. Take with you some of the elders of Israel and take in your hand the staff with which you struck the Nile, and go. I will stand there before you by the rock at Horeb. Strike the rock, and water will come out of it for the people to drink.’ So Moses did this in the sight of the elders of Israel. (Exodus 17:5,6 NIV)

Why Did God Disciple Them?

Clearly the Lord saw it as a very serious matter, but why? I would like to suggest two reasons.

Firstly, Moses and Aaron had both seen, with their own eyes, God perform many amazing miracles: the plagues in Egypt; the parting of the Red Sea; the Lord provide manner and quail to eat; the Lord descending on Mount Sinai; and many more. Did God not have a right to expect a very high level of trust from them? As Jesus said, “From everyone who has been given much, much will be demanded”.

The second reason is this:

A lack of trust in God, dishonors him.

When our trust in God is lacking, are we not saying to ourselves, and any observers, things like:

“I’m not sure God can do this.”
“I know he can do this, but perhaps he won’t because he doesn’t have my best interests at heart.”
“I know what is best here, but I’m not sure God will see it the same way, and I’m afraid of what the outcome will be.”
“If I obey God, I think I’m going to miss out, or suffer for it. I’d rather do what seems best to me rather than trust God for an outcome that I can’t see.”

You see, when we do not trust in God, we are calling into question either his power, or his wisdom, or his love, and that dishonors him, it suggests that he is less than he is.

One of the clear messages to come from the books of Exodus, Leviticus, Numbers and Deuteronomy, is that God is uncompromising when it comes to his honor. This is why Moses and Aaron were disciplined: for not honoring God with their trust.

What About You and Me?

So what can we learn from Moses’ and Aaron’s experience? I’d like to highlight two things: a revelation; and an encouragement.

The revelation is this:

If God is so uncompromising in defending his honor, how great must his love for us be, that he was willing for his Son to suffer the shame of the cross.

I’ve heard people talk about the “shame of the cross” many times, but I think I now understand it more through the contrast presented here. Is not the darkness seen most clearly when compared with the light? The contrast could not be greater between: the God of the Exodus, the consuming fire, who destroyed those who approached him in any unauthorized way; and the man Jesus of Nazareth, who was also fully God, who suffered such torment, ridicule, and rejection on the cross.

Does not this astonishing contrast make us shout, “Amazing grace, how can it be?” Is not the only explanation for this, the boundless love of God for you and for me? If you mediate on these things, they will make your heart sing and your soul rejoice.

And the encouragement is this:

Let honoring God be your motivation to trust in him.

So often when we think about trust we make it about us: how we feel; how we might be affected. But in the Lord’s response to Moses and Aaron we see that it is about more than us, it is about God’s honor. When we place our trust in him, we honor him. The other side of the coin from the Lord’s words to Moses and Aaron is this question, “Will you trust in me enough to honor me?”

So, is trusting God a matter of honor? Yes it is, but it’s not a matter of our honor, it’s his. Let us aspire to honor God with the level of trust expressed by Job in his suffering:

Share
Facebook
Twitter
Pinterest
WhatsApp
Previous article
Don’t Let Your Faith Get Lost
Next article
You can’t pack all Christian theology into one verse, so don’t draw yours from one.
RELATED ARTICLES
Spiritual Growth