No Trophies From God 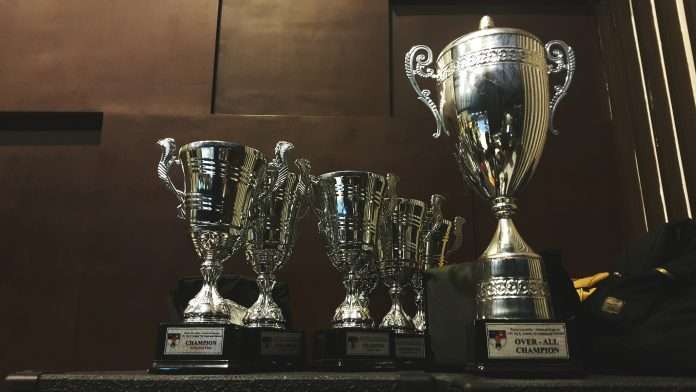 Our verse for today comes from Mark 14:23, “Then He took the cup, and when He had given thanks He gave it to them, and they all drank from it.”

There is a mindset in today’s culture where everything has to be recognized.  Kids can no longer simply play on a team, with perhaps the best player getting an MVP award come season’s end.  Nowadays, every child gets a trophy just for being on the team.  Even professional athletes suffer from it.  When a basketball player, who makes millions of dollars shooting the ball, sinks a three-pointer or slams down a dunk, he cannot simply hustle back to the other end of the court and play defense.  Rather, he has to pose or gyrate to make sure everyone appreciates his grand accomplishment.  And we certainly know the quickest way to raise a bunch of money is to promise the donor that his or her name will be all over the building or event.  And, I think we are raising our kids to propagate this mentality.  How many young ones are growing up expecting to be paid for every simple chore they perform at home?  What is there that a parent can expect their child to do merely because they are a part of the family and thus have a certain amount of responsibility?  I hope it’s more than what pop culture would have us believe from its movies and television shows.

When Jesus took the cup, He passed it around, and they all drank from it.  Of course, what else would they have done?  Well, take a moment and read a few scriptures where He commands us to do such and such.  Is that what we are doing?  If it’s all so straightforward, why do we make it so complicated?  Sure, the disciples argued over who would be the greatest, so they were certainly flawed.  But why would it seem perfectly normal if today Jesus passed the cup and we all wanted to know why we didn’t get our own cup?  Why do we have this compulsion to get a return from what God has asked us to give to Him?  What makes us crave that trophy when we do the things that we should do?  If you are following, shouldn’t the leader expect certain things from you?  Jesus came to give us life.  Shouldn’t that life look a certain way and totally depend on and reflect the life-giver?

As we seek Him today, make the time to do what you should.  And if your heart seems a little distant from Jesus, talk to Him about it.  That’s what He expects you to do.