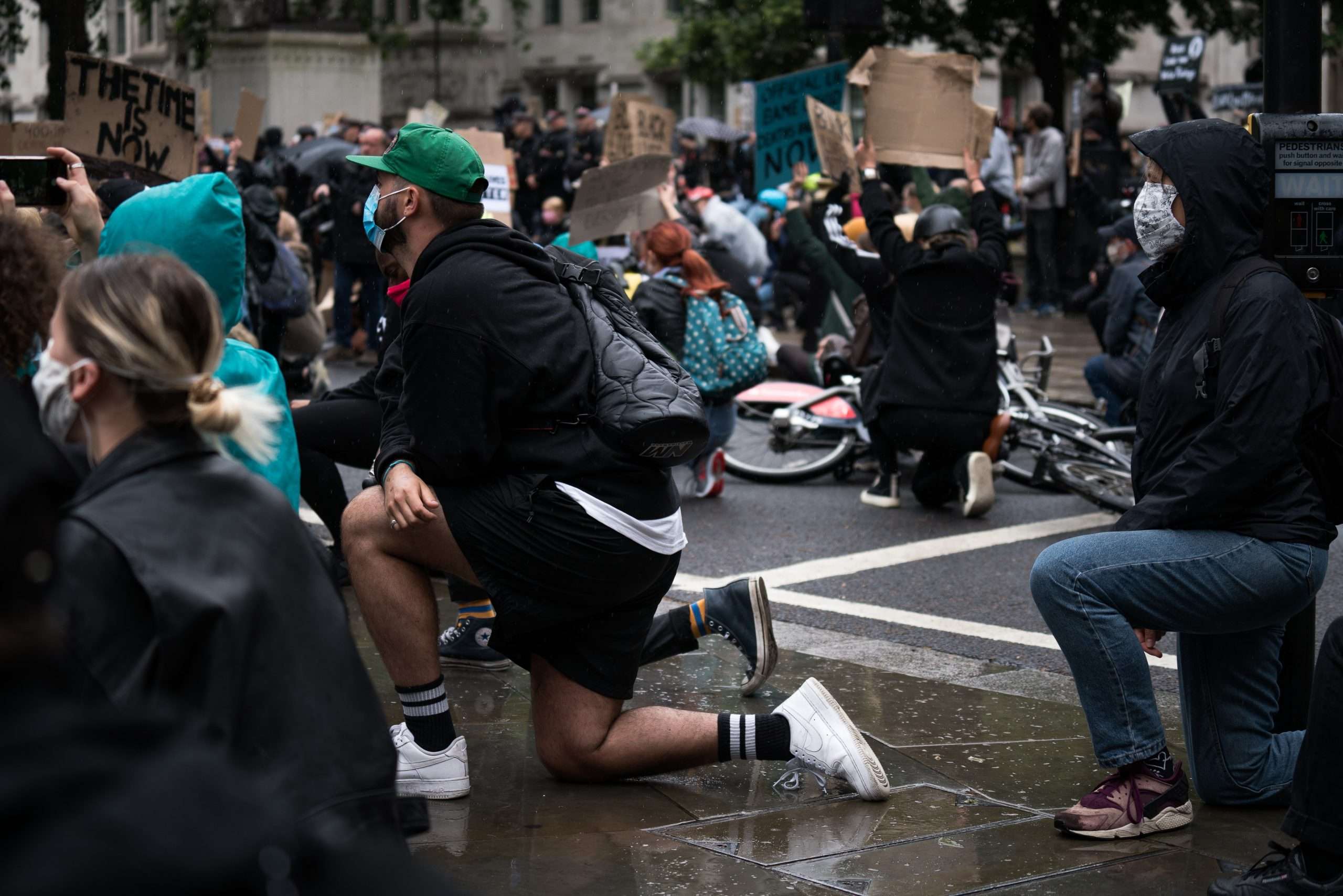 As Biblical Christians, this is a valid question. Where should we stand in this continuum of tension between, “Stand Up For Your Country”, the slogan coined by Bill O’Reilly, or “Take a Knee for its Injustices”, the visual campaign started by Colin Kaepernick? Obviously, there is so much material on this issue that many books have, and will be written about it. However, after all the rhetoric and venom has been spilled, where should the true Christian stand? Equally important, how should the Christian defend their stance in such a polarized climate?

No one who reads articles from BCWorldview would be surprised that my position leans heavily toward standing up. That is because these two positions are not in opposition.

Let me begin by acknowledging America has had a spotted history in human rights. It was not so long ago (January of 1963) that Governor George Wallace, in his inaugural address, spoke the infamous words, “segregation now, segregation tomorrow, segregation forever.” In June of that same year, he stood at the main auditorium door of the University of Alabama trying to block African American students from being admitted to class. President Kennedy sent 100 National Guardsmen (remember when 100 was a lot) to overrule Wallace’s blockade.

There are hundreds of examples of racial prejudice that we could point to in this country. I used Wallace as an example because, before his death, the former governor recanted his position. In his last term in office (1982), Wallace won more than 90% of the black vote.

The title of this brief article is taken from today’s headlines, not those of 50 years ago. To me, there are four questions that need to be addressed by the Biblical Christian.

However, we also need to acknowledge that we are God’s children. We are born-again through His grace and the sacrifice of His Son, yet we remain sinners. This does not give us a license to continue in the sin of prejudice (John 13:34-35), but it does acknowledge its reality on this side of the grave.

Is There Still Prejudice In America?

Sadly, prejudice remains in America. Most bias has long since gone below the surface from the days of George Wallace and the Ku Klux Clan. However, that does not make it any less against God’s Word. In a litany of race-based presuppositions and practices, prejudice remains in our country. It is true that we can all point to multiple examples of “Good Samaritans” in our own lives coupled with what we have read and heard in the news. But even if there was some cosmic seesaw weighing good deeds with the bad deeds of subtle and overt discrimination, Christians need to be reminded that the heart of man is evil.

Further, God does not use a seesaw when He judges mankind. If He did, we would all be attempting to work our way to Heaven. We would be trying to do more good than harm to earn our spot. Biblical Christians know this not to be true (Ephesians 2:8-10), regardless of what our secular society tries to promote. We are all sinners (Romans 3:23) and, through our own efforts, fall short of God’s criteria (perfefction) for eternal life with Him.  Prejudice, whether it be through race, color, religion, sex, or national origin will always be a part of the sin nature of man. We can try to legislate it away, or ignore it, or use the seesaw principle to make us feel good. However, our sin nature will never go away until we pass away.

How are we, as Biblical Christians, to deal with the reality that there will always be prejudice in America? I see four broad answers to this question. We can ignore it as many do, or we can rationalize it away by comparing today to the past saying we are doing better, so all is well. Third, we can riot over it, destroying property, yelling at whoever will listen, and putting fear into those who disagree. Finally, we can continue an open dialogue, rooting out those pockets of worst offenders. We can try to set both public and private standards of morality that blunt its impact.

In my opinion, most Christians have taken the first approach to a solution. Prior to the last few years, we have assumed the moral high ground, saying that ‘we don’t see color’ anymore. That woman are doing so much better in the workplace. That ageism is not a problem in this country, and that we welcome all religions and their theology, without bias. Yes, the sin of prejudice and discrimination extends far beyond issues related to African Americans. In the last few years, there has been a wave of “wokeness” in this country that has challenged the comfortable status quo. It has been violent and it has brought fear. Further, it has brought the destruction of life and property. Finally, it has brought divisiveness of an unprecedented magnitude, even when compared to the 60’s Vietnam War protests.

Rationalization is the second solution to prejudice in America. However, just turning our backs on reality by saying “we are doing better” ignores this, more hidden and continuing sin.

The third solution was exemplified by Chris Cuomo, quoted as stating “Who says protests have to be peaceful”?  This is not the approach Biblical Christians should be taking. We recognize that sin and prejudice are not a disease that can be beaten out of mankind (Romans 12:18).

In the end, open dialogue, acknowledging efforts to work on the problem in both a public and private setting, remains the best choice for progress.

What Is The Difference Between Equity vs. Equality?

As individuals, we hear from our media outlets that we either need to stand up for our country or take a knee for its obvious injustices. There is no middle ground. We live in a country of polarization. Divisiveness has spread to all sectors of our society. Anger and hatred both destroy and silence our citizens. It also serves to insert government and corporate (Twitter, Facebook, Amazon, etc.) control over freedoms we thought were written in stone. To me, this is one of the many signs that we are headed into the End Times. It is the reason for BCWorldview as a source for news and opinion.

Currently, divisiveness is formulating around the terms, “equity” vs. “equality”. There are many examples of how words are redefined (such as the word Christian , or the word Liberal), to better conform to a political objective.  Webster defines these two words as follows:

However, the new social definitions of these words are more like:

Legislating and speaking out against (primarily racial) inequality has been the focus of the more liberal factions in our country. As I said earlier, Christians and conservatives largely took the side of silence on the matter. Seeing this form of protest against discrimination as not going far or fast enough, liberals have moved on from a focus on “equality” to an attempt to obtain “equity” for the disenfranchised. It is no longer enough to provide a governmental solution in the here-and-now (equality) through enforcement of civil rights laws, and other anti-discrimination efforts. We need to accept the historical damage done to the oppressed in our nation. We need to provide sources of reapportionment of wealth to catch them up (equity). This includes terms like “reparations” and “social justice”. It also includes concrete initiatives such as “Free College Tuition” and “Universal Healthcare”.

This changing perspective was made clear recently by Vice-President Kamala Harris in a Twitter post, “So there’s a big difference between equality and equity. Equality suggests, ‘Oh, everyone should get the same amount.’ The problem with that is that not everybody’s starting out from the same place. So, if we’re all getting the same amount, but you started out back there and I started out over here, we could get the same amount, but you’re still going to be that far back behind me. It’s about giving people the resources and the support they need, so that everyone can be on equal footing, and then compete on equal footing. Equitable treatment means we all end up at the same place.”

Newsweek published an article in February of 2021 entitled “Joe Biden’s Use of ‘Equity’ Over ‘Equality’ Opens New Front in Culture War”. The article noted that the word “equity” has appeared in “nearly every executive order, policy proposal and speech, given by the President and his top officials since inauguration…in [a] push for woke ‘equity’, Biden abandons equality”.

Is this striving for the elusive goal of government-mandated “equity” over its past attempts at “equality” the answer? I don’t think so.

In my opinion, there are three major principles that Biblical Christians need to address as we decide how to respond to prejudice and American injustice.

My view is that, as Americans, we need to recognize that we are sinners in need of a Savior, and will always be as such. However, we also need to remind ourselves that neither riots at one extreme, nor complacency at the other, is the solution to the injustices our nation still faces. If taking a knee in a sports event fosters divisiveness and violence, it is not the answer. If standing up for our country is used as an excuse to ignore the injustices that still exist, we need to reject that as well. As individuals and as a nation, we need to make progress, peacefully and respectfully, (as Wallace finally did). Always working toward but recognizing we will never achieve, full equality, much less equity.