The Andromeda Galaxy M31 Amazing Facts That Will Blow You Away: 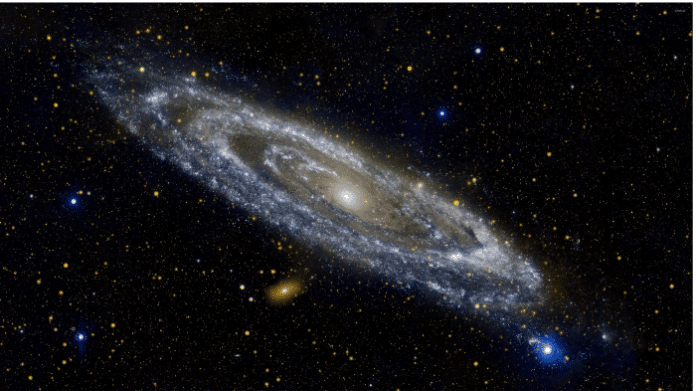 Andromeda’s Galaxy Facts You Should Know

The Andromeda Galaxy, also known as M31, is a spiral galaxy situated at a distance of 2.5 million light-years from Earth, or (758kpc.) M31 is the closest major galaxy to the Milky Way and was often referred to as being located in the constellation Andromeda.

The Andromeda Galaxy is visible to the naked eye as a faint smudge on a moonless night; however, it’s best observed with binoculars or a telescope. It has an old age of 12 billion years and possesses both young and older stars making up its 100 billion stars.

While the Andromeda Galaxy has always been considered the most distant galaxy visible to the unaided eye, astronomers deduced that it cannot be seen with the naked eye from southern latitudes where it doesn’t rise high enough above the horizon.

The Andromeda Galaxy, also known as M31, is a spiral galaxy situated at a distance of 2.5 million light-years from Earth. It’s the nearest major galaxy to the Milky Way, and it’s by far the most studied object in the Local Group after our own galaxy.

You might ask; how to find Andromeda Galaxy? The answer is quite simply, get to the highest mountain peak, take a pair of binoculars and make sure the sky is clear and is without pollution so that you will definitely see the Andromeda Galaxy.

Also, you might ask; where is the Andromeda Galaxy? Simply, it’s near the great square of Pegasus.

You can see this galaxy with your naked eye if you find an unobstructed view at night. There are many interesting facts about the Andromeda Galaxy that you need to know, so read on!

If you are also interested in reading my viral article about m51 galaxy, then click this link.

The Andromeda Galaxy is closing in on the Milky Way at a speed of ~100-150 kilometers per second.

The Andromeda Galaxy is a spiral galaxy about 2.5 million light-years from Earth. It is the nearest major galaxy to the Milky Way and was often referred to as the “Great Andromeda Nebula” in older texts.

The Andromeda Galaxy is a spiral galaxy that’s located near the Milky Way. It’s moving through the universe and is bringing along several dwarf galaxies, such as M33, M32, etc…

The Andromeda Galaxy is the largest galaxy in the Local Group, containing up to one trillion stars. This makes it about 40 percent more massive than the Milky Way.

The galaxy is centered on a flat, winding disk with a diameter of about 200,000 light-years. It’s surrounded by a massive nimbus of material that’s known as dark matter.

Fun fact: Scientists can’t observe dark matter, but they believe it’s out there, they spent hundreds of billions of dollars trying to detect it, and every experiment of theirs, fails.

The galaxy has a total of ~410 billion solar masses and spans 622,000 light-years across. If you were to look at this galaxy from above, it would have a shape that resembles an oval shape.

One of the most interesting facts about Andromeda Galaxy is that there are two types of spiral arms in this galaxy. One type is composed of large circular arms, while another type has short, linear arms with small “spurs” coming off them.

Isaac Newton, who was the first person to describe the phenomenon of gravity, predicted that there are other galaxies out there besides our own.

A few centuries later, in 1755, German astronomer William Herschel was able to spot it with his telescope, while he thought that this galaxy was part of our galaxy, he was wrong.

The Andromeda Galaxy is one of many galaxies in the Local Group. It’s also called M31 because it was the 31st object on Charles Messier’s list of objects that have been mistaken for comets.

This galaxy is the nearest major galaxy to our own Milky Way, and it’s by far the most studied object in the Local Group after our own galaxy.

Other Interesting Facts about the Andromeda Galaxy

Andromeda is expected to crash into the Milky Way sometime in the next 4.5 billion years. It’s believed that the two galaxies will then merge and form a new elliptical structure.

Andromeda Galaxy is a spiral galaxy, which means:

A galaxy in which the stars and gas clouds are concentrated mainly in one or more spiral arms. Source

The Andromeda Galaxy is the largest galaxy in the Local Group, which is a group of galaxies that includes more than 54 galaxies. In total, it’s about 2.5 million light-years from Earth.

The Milky Way is one of the galaxies that belongs to the Local Group galaxy group. It’s also part of the Virgo Super cluster, which means there are more galaxies than just ours.

The Local Group is a collection of galaxies that includes around 54 galaxies, with the Milky Way at its center. Andromeda Galaxy is the largest member of this group. It’s also the closest major galaxy to our own galaxy, which is why it’s one of the best studied objects in this Local Group.

Throughout human history, the Andromeda Galaxy has been a subject of both scientific and artistic inquiry. Today, it is known for more than just its beauty, the galaxy is also rich in interesting and stunning facts, and information.

While the galaxy looks amazing and stunning, some may contribute this beauty to its original Creator, God, who created everything.

While it is logical to assume that because this galaxy will crash into our own galaxy(Milky Way) it is logical to be worried, but the truth is this, if you are a believer in God let’s say, then everything that has been prophesied will come to pass.

And you won’t find a galaxy crashing into our own galaxy, in the Bible, the Bible says that God will destroy the world and it’s elements one day.

But this will happen only after the rapture, and the second coming of Jesus, more about that check out my other article which I have written, concerning the prophecy of the Bible.

Then the Bible tell us that God will create new earth and new heavens, where harmony and peace will reign, this world will have no oceans, everyone will be able to have its own land, the climate will be perfect, warm and good to the body.

I highly encourage everybody to read those 2 books, at the very least.

Be Sure of Your Own Commitments