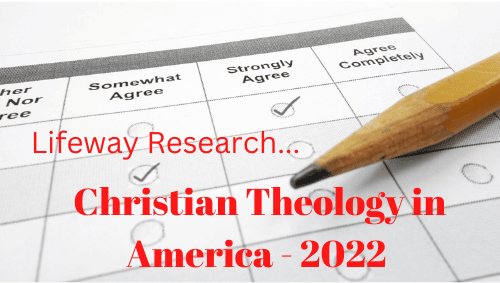 In September of 2022, Lifeway Research published its biennial poll on the state of Christian theological beliefs in America. It contained some very interesting and somewhat conflicting results.  For detailed findings the following links are provided:

Three thousand adults were surveyed in the month of January 2022, resulting in a sample having 95% statistical confidence of accuracy +_ 1.9%. There was some minor weighting in order to accurately reflect American population demographics.

Who is Jesus and the Holy Spirit

More than half of Americans do not accept Jesus as God, yet (from above), 71% believe in the Trinity.

*The question of 51% + 53% being greater than 100% was not addressed in the study. However, some can view the Bible as being accurate in its teachings and theology, yet still not be literally true in areas such as history and science.

If 6 out of 10 adults believe Biblical Christianity is not “objective truth” from God, then it is no wonder so many place their own values and morals above Scripture.

If 80% of Americans believe God created separate males and females, yet 42% believe gender is a matter of [human] choice, then 22% of us believe God made a decision that we choose to reject.

Nearly 7 in 10 adults believe man is “good by nature”, even in the face of the sin which reigns all around us. Further, why is the belief in an eternal Hell continuing to rise?

The spiritual damage accelerated by the pandemic is hard to overstate.

As one would expect, the state of Biblical Christianity in America is both concerning and deteriorating as successive generations fail to draw strength and their moral compass from an all-knowing, all-powerful Creator of the universe.

Particularly concerning are the results that seem to be in tension with each other. For example, 71% of American adults believe in a trinitarian God, yet 67% believe Christians and Muslims worship the same God. Clearly, this falls outside the range of acceptable theology from either religion. Further, 60% of Americans believe religion, in all its forms, does not offer objective truth. The Bible speaks directly and clearly to both these eternal points by stating,

Jesus said to him, “I am the way, and the truth, and the life. No one comes to the Father except through me. – John 14:6

Repent of the Evil in Your Life