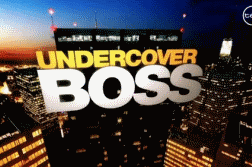 Our verse for today comes from John 1:11, “He came to His own, and His own did not receive Him.” There Is Nothing “Undercover” About Jesus.

What do companies like 7-Eleven, DirecTV, Chiquita, NASCAR, Subway, Waste Management, Cinnabon, Moe’s, Orkin, and Family Dollar have in common?  On the surface, perhaps practically nothing.  But each one of these, along with about 90 other companies or organizations, has been the willing participant and subject matter of a television show called Undercover Boss.  In each episode, the owner or a high-ranking executive works undercover as an entry-level employee at one of the locations of his company.  The executives disguise their appearance, use a fictitious name, and formulate a fictional personal background with the intent of going undetected until the time comes for them to reveal their identity and respond to what they have seen and experienced.

In many cases, hard-working employees are given promotions, raises, or bonuses, while others receive training or better work conditions.  In certain instances, the experience has been so dramatic as to cause the executive to end the ruse on the spot and terminate an employee for their poor performance or attitude.  But regardless of the outcome, the effectiveness of the entire premise is contingent upon the executive remaining unknown among his new co-workers as to his real identity.  The desired authenticity of the feedback and interaction would be impossible if the laborers knew that it was the CEO who was working among them to make the subs or work the cash register.

But the very opposite is true in how our Lord works.  The fact that He is present and alive in our hearts, working in and through us in our successes as well as our failures, is the calling card, the very name tag, that we are given when we become a member of His family.  Although He works in unseen ways and apart from any particular devices of man, He alone is the One doing what is being done, and He alone deserves the recognition.  And in order for Him to get the responses that He wants, we must let as many as possible know who He is and what He is about.  There is nothing undercover about our boss.  He is King Jesus.

As we seek Him today, let it be known to all whom you serve.

The Potter — How to Find Meaning & Purpose