UN Sculpture and the Bible 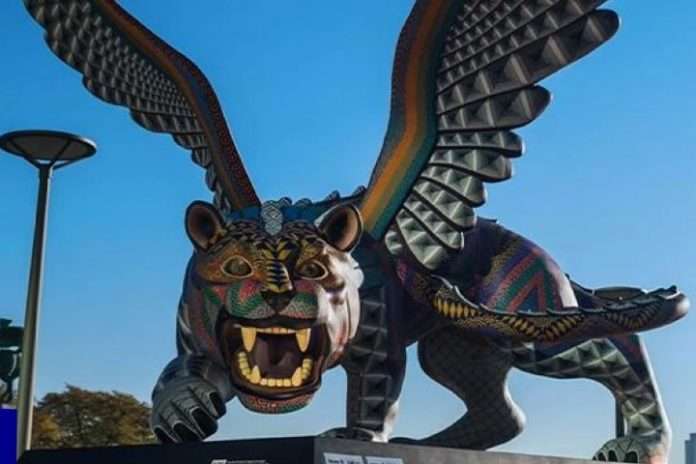 This is a Sculpture recently donated by Oaxaca, Mexico to the United Nations. According to a press release from the UN, it symbolizes a “Guardian for International Peace and Security” and currently sits outside the Visitor’s Plaza. According to the artist, it represents the fusion of an eagle and a jaguar.

Of course many Biblical Christians see more than a statue. They see prophetic representation of the End-Times, based on the following Scripture.

From the first verse of Revelation chapter 13, we know that the “beast” or “dragon” is a direct reference to Satan.

Most theologians believe the “first beast” in Daniel’s vision represents the great city of Babylon.

What ties this verse to the UN statue is the term “peace and security”, as part of the title of the statue and as a precursor to the labor pains which are the beginning of the End-Times.

Satanic influence on display is not unique to the UN. Since 2018 The Satanic Temple has had a display in the rotunda of the Illinois capital building. This year, sitting across from the nativity scene with the baby Jesus is Baphomet, also in swaddling clothes and lying in a manger. He is a goat head on a sub-human body, and was worshipped in the past by the Knights Templar. Today it is an occult symbol worshipped by Satanists.

In the End-Times, most of mankind will be lulled into a false sense of safety and prosperity, protected by a great leader, as the world falls into chaos. At some point, he will reveal himself as the Antichrist. Any impact from sculptures and displays like tbese are likely ways to habituate the population to what is coming in the future (2 Pet. 3:2-10).

The “guardian for international peace and security” beast on display at the UN was unceremoniously removed on December 20th. A spokesman for the United Nations stated that the exhibit was intended to be temporary. We are left to wonder if public opinion had anything to do with its disappearance.