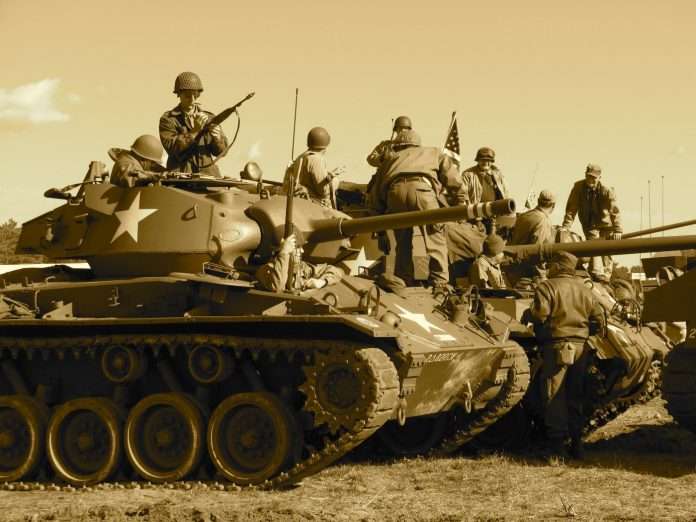 General George Patton, “Ol’ Blood & Guts” He was either loved or hated because of the way he conducted his life. Things were Black or White, they were right or wrong. He knew how to wage war and how to win. When his superiors disagreed with him, he found a way to do it his way and he won. But what can we learn from Patton regarding the Spiritual War?

The leading quote defines the person who will be successful in waging war. War is not complicated, we lose when we overcomplicate it. It can be boiled down to these truths:

There is an enemy.

He must be killed.

There will be casualties.

There is an enemy: Who is the enemy, in most cases you need look no further than the mirror. The enemy is not Muslim, the Atheist or the liberal media, the enemy is the sin in our own lives that keeps us from full devotion to our God, it defames the name of Christ and makes His mission on this earth less effective because of our personal sins. Our enemy is the silence of our own tongues which fail to proclaim the glories of Jesus Christ. Our enemy is our own self-love and tolerance of disunity within the body.

He must be killed: There is no way around this truth. to win you must kill, kill the selfish drive in your heart so that you can learn to love your neighbor more than yourself, kill the addictions that distract you from the one true God who is sufficient to meet all of your needs,

It’s spiritual Suicide, Dying to yourself, He takes your sin but you have to kill the Old Man. It is the ONLY way to see victory. He provides the tools and the sanctification, but you have to be willing to do the ugly work of war. It’s bloody and brutal but you must kill.

There will be casualties

Some will be heroes and some will be cowards. The heroes are the ones who willingly give their lives (kill their old man) in love and service to their Savior. They submit themselves to the Lords discipline and they allow him to mold them into the soldier they were meant to be. These men change the world. These men plant churches in enemy territory, these men lead others to follow their example, these men are true disciples of Jesus Christ.

The other casualties are the cowards. Patton famously got in trouble for slapping a soldier who he considered a coward and kicking him out of the hospital because he did not deserve to be treated with the other heroes who were there. We should feel the same about the nominal Christians who use the name of Christ for their own gain but do not obey the teachings that define a follower of Jesus. They are imposters and it should piss us off.

These cowards they want to wear the colors of the cross, they want to be known as believers, Christians, even leaders. But they are not willing to make the sacrifices that make them heroes. They shy away from self-sacrifice, they allow their sin to rule them and they hide it from their peers. They talk about spiritual maturity but they themselves are only babes. We have seen these casualties, they are usually in the public eye as a minister falls into sin, or a leader loses his faith. We have seen once strong men lose their way and bow to cultural “truths” instead of standing on the firm foundation of God’s word. These men will fall and the temptation is to be discouraged by their cowardice, but look to the true Heroes and emulate them. Let the cowards fall into obscurity.

So, men, let us be serious-minded and devote ourselves to the spiritual battle. Let us discipline ourselves and deal with our personal sin, as we lead others into the disciplined spiritual life. Jesus is the perfect example of what we aspire to. He did the hard thing, not seeking glory, but obedience. Let us do the same.