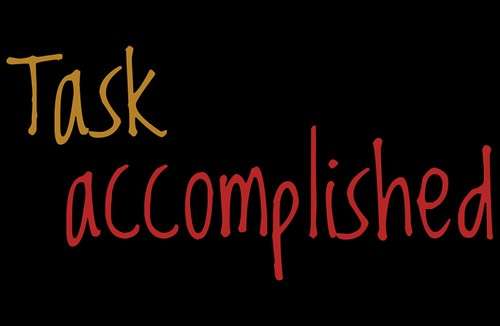 Our verse for today comes from Nehemiah 2:5, ” I said to the king, ‘If it please the king, and if your servant has found favor in your sight, I ask that you send me to Judah, to the city of my fathers’ tombs, that I may rebuild it.’

I read a question on a survey recently that asked whether I was a person who liked to start projects or finish them. And as I thought about that question, I couldn’t help but think of my uncle. He was a hard-working man who could build or fix most anything with his hands. He had built houses, constructed warehouses, renovated buildings, fixed cars, and worked on just about anything that needed fixing. But he sort of had a reputation of not quite finishing the projects that he started. The house he lived in the last twenty or so years of his life was a lovely, spacious home that he built brick by brick. But in and around its dwelling, there were things here and there that were never completed. Little things like the intercom system not being connected, or larger things like the water fountain in the front yard never operating, not to mention the several cars in the driveway that almost worked. I don’t know if he was always taking on more than he bargained for or not, but I do know he was never one to say no or think that something couldn’t get done.

When Nehemiah heard that the walls of Jerusalem were torn down and its gates were burned, it ripped his soul apart and sent him weeping, fasting, and praying to the Lord. But then it sent him to the king. As the king’s cupbearer, he had a certain relationship of trust and respect with Artaxerxes. Testing the king’s wine for poison can build that between ruler and servant. And as such, Nehemiah asked the king if he could return to Jerusalem to rebuild it. But how does one man rebuild a city? Apparently that thought didn’t concern Nehemiah. He had the king prepare letters for him to ensure safe passage and an abundance of materials with which to build, and off he went. Without securing a host of laborers or even telling anyone what his plans were, he headed back to Jerusalem, to rebuild it. That seems like inspiration enough to take on a task and complete it for the Lord. It sure makes our stinginess with an hour or two look lame in comparison with what God could do through us.

As we seek Him today, take on the task that God is laying on your heart. Go forward in confidence and dependence on the Holy Spirit to provide everything that you will need.

Share
Facebook
Twitter
Pinterest
WhatsApp
Previous article
Biblical Post-Christian News for Wednesday, December 7, 2022
Next article
Truth is not found in the vitriol of the extremes which is what sadly consumes much of the conversation.
RELATED ARTICLES
Devotion