Who Are We Praying To As A Nation 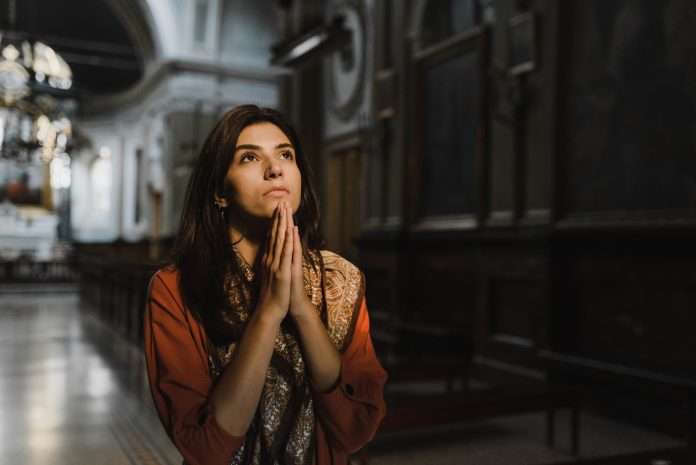 Right now, the conservative news cycle is briefly focused on Biden’s National Day of Prayer (NDP) proclamation. There are endless references to the fact that he left out the word “God” from his speech. When we use the word “god”, deeper question is, who are we really praying to as a nation?

To me, what everyone seems to be missing in this rush to judgment on Biden, goes back to an earlier article on this subject in BCWorldview.org. It speaks to how far we have drifted, as a nation, away from our Biblical Christian roots. We have watered down the gospel. Our level of acceptability regarding expectations for what was once a Christ-centric day of prayer have all but disappeared.

What God Are We Praying To?

Conservative, and even the Christian media, have focused exclusively on Biden not mentioning the word “God” on May 6th, 2021.  My concern is when our politicians DO mention God, what god are they referring to? Is this the “Almighty God” that Billy Graham referenced in 1952 when he was instrumental in establishing the NDP as a congressional bill? Sadly, in so many cases I no longer think so.

Our current president self-identifies as a Roman Catholic. Again, however, he excluded any version of “god” from his latest speech, focused on prayer. Further, Catholic bishops are meeting in June to decide if our president should be asked to stop taking communion. This review is based on his very public pro-abortion position, the antithesis of a Biblical Christian Worldview. Further, this catholic controversy ignores Biden’s position on homosexuality, which is another stumbling stone for the Catholic faithful.

Franklin Graham offered his rationalization for the recent omission by Biden of the word “God”, by stating:

“…[I] cannot figure out why Biden left the name of the Creator out of his proclamation. “I’m not sure that [Biden] even knows. It was probably a staff person that wrote it and maybe not even ran it by him — because I don’t think Joe Biden would have approved that one,” Graham said.

Graham, always taking advantage of his public persona to offer the gospel, went on to say:

“This is a National Day of Prayer. Of course, we need to call on God – and not just some generic ‘gods’ or some ‘power’ in the air – but on God himself, the Creator who made and created this Earth and who sent his Son, Jesus Christ from Heaven to this Earth to save mankind from sin by dying on a cross.”

References to some version of “god” under President Trump’s parallel NDP speeches from 2017, 2018, 2019, and 2020, were five, five, seven, and eleven times, respectively. He has been credited with using more religious terms in his addresses than any other president in the past 100 years. However, many question whether that is more a reflection of pandering to his evangelical base or a reflection of his true Biblical Christian Worldview. In October of 2020, Christianity Today did an article on President Trump, documenting his transition from Presbyterian (USA) toward a more evangelical, non-denominational Christian faith. Certainly his rhetoric, if not some of his behavior, reflects strongly held Christian beliefs and we should commend him for that.

In 2009, then-president Obama issued the required proclamation, but chose not to host the traditional prayer service at the White House. In his 2015 NDP proclamation, he referenced “god” or “God” three times. His third reference was religiously all-encompassing:

“I join all people of faith in asking for God’s continued guidance, mercy, and protection as we seek a more just world.”

ABC News wrote an article in August of 2010, discussing Obama’s religious affiliation in an interview with Franklin Graham. Graham was quoted as saying, “It’s obvious that the president has renounced the prophet Mohammed, and he has renounced Islam, and he has accepted Jesus Christ. That’s what he says he has done. I cannot say that he hasn’t. So I just have to believe that the president is what he has said,” Graham continued, adding that “the Islamic world sees the president as one of theirs.” Further in that article, a Pew Research poll indicated that as of 2010, only 34% of Americans believe Obama is a Christian.

President Bush, so as not to be ecumenically misunderstood, was specific when, during one of his NDP proclamations, he referred directly to the “God of the Bible”. When questioned about his faith, Bush responded:

“Asked whether he had been “born again,” he said, “If by ‘born again’ one is asking, ‘Do you accept Jesus Christ as your personal Savior?’ then I could answer a clear-cut ‘Yes.’ No hesitancy, no awkwardness.”

However, in 2003 Bush, pressed by American Muslims due to our involvement in the Iraq war, drew harsh criticism from evangelicals when he made the statement, “I do say that freedom is the Almighty’s gift to every person, I also condition it by saying freedom is not America’s gift to the world, it is much greater than that of course, and I believe we worship the same God.”

Are We Praying to the God of the Bible?

Are these speeches/prayers a reference to the God of the Bible? Are we satisfied that all is well in Washington DC and around the country because past presidents included the word “god” in their often twisted, religiously open-ended, heretical pronouncements? Perhaps, it would have been better if they had left “god” out entirely rather than confuse and further pander to the public. Praying to a false god makes carnal Christians and others who adhere to false teachings feel warm and fuzzy. The results can actually be more destructive than beneficial to the Biblical Christian faithful.

And, What About Jesus?

While we are desperately looking for some form of “god” in speeches from politicians on a designated day of prayer, everyone, including Franklin Graham, seem to have lost the point that ecumenical references to a false god is not only blasphemy in play. Pundits have ignored the total absence of of the word “Jesus”, the true meaning of the gospel message.

The reality is that our country has drifted so far from true Christianity that these national speeches are, at best, a recognition that there is still a supreme power who rests above mankind in some god-like fashion. For decades we have not had the luxury of clearly stating that the Biblical Christian God (Father, Son, and Holy Spirit) is that omnipotent deity that holds eternity in His hands. The guardrails that restrict our freedom to express our religious beliefs have gotten narrower and narrower. Prior to 1962, (when it was outlawed), we were a country where, each day, nearly every school-aged child began their education with a prayer, quoted directly from Matthew 6:8-13:

Pray then like this:
“Our Father in heaven,
hallowed be your name.
Your kingdom come,
your will be done,
on earth as it is in heaven.
Give us this day our daily bread,
and forgive us our debts,
as we also have forgiven our debtors.
And lead us not into temptation,
but deliver us from evil.

Where in 2005, the Supreme Court barred courthouses and other government property from displaying the 10 Commandments. We have become a nation in which it is politically safer to exclude “god”, much less “God” and “Jesus”, even at an annual event initially devoted to the triune God, the National Day of Prayer.

As Biblical Christians, we strive not to be offensive, to show love and compassion, to be woke, inclusive, and, equitable, within the theology of our faith. In doing so we can become fearful of openly sharing our beliefs. We risk becoming impotent in the eternal truth of the gospel. That there is only one way to Heaven, through grace alone, faith alone, and in Christ alone. It is true that we currently live in a gray world, full of shadows of the truth, that can be twisted and discounted. However, we are not citizens of this world (Phil 3:20). In the end, as we all must eventually approach the true God of the universe, there remains only two immutable choices, Heaven or Hell, truth or lie, salvation or death (Mat. 25:33-34, 41). As the world becomes darker and darker, we, as Biblical Christians, should not lose our sense of who God is and what He calls each of us to do.

Matthew 24:10-12 And then many will fall away and betray one another and hate one another. And many false prophets will arise and lead many astray. And because lawlessness will be increased, the love of many will grow cold.

Mark 16:15 And he said to them, “Go into all the world and proclaim the gospel to the whole creation.