Why Most People Are Not on Truth Quest But Rather on Happiness Quest. 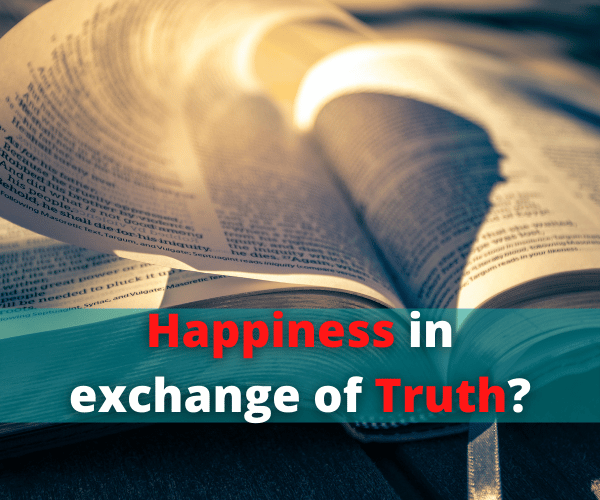 Here’s what you should pursue instead.

People aren’t on Truth Quest anymore because it’s difficult to find truth in the world of fake and deceiving news, and it’s not just because of these factors; some people simply value happiness over the truth. However, there are minorities who are open to finding out the truth about life and reality, and living their lives in accordance to it, in fact, that’s what the bible says:

As fellow human beings, we are always looking for happiness in this world. We live in a society that values having fun and feeling good, and nothing else. This has led to what some people call the pursuit of the Happiness Quest.

First, what truth am I talking about? The truth I am talking about knowing your Creator who gave you life. While arguing from a Christian perspective, there is absolutely nothing more precious and brilliant than our upcoming everlasting life. The decisions we make today in this world will have an effect on our upcoming life. That’s the truth I am talking about, and until we realize that Christianity, in fact, is true and that there is nothing more precious than our everlasting life in heaven, we will never change our ways.

Anyway, are you on the happiness quest or the truth quest? It’s not a tricky question to ask yourself. It is an important philosophical, and deep question that every person should be asking themselves, because if it’s true that there is such a place as Hell, then most of the humanity would be in trouble, Jesus himself preached twice as much about Hell than he did about Heaven.

Life as we know it isn’t very easy. But, it doesn’t have to be that way for everyone. While arguing from a biblical perspective, as I said, there is nothing more precious than our everlasting life in Heaven, because Jesus made the way for us to be saved, if we will simply choose to believe in him (John 3:16 from the bible). The price is free, and anyone can become saved at any given time.

We live in a world where happiness is the ultimate goal, people these days are not seeking anything but money, money is power, and in fact, you can do many things with money, such as, buy a house or a new car, there is nothing wrong with having money.

However, money becomes a problem when you start idolizing it, meaning when you are doing everything in your power to gain money and nothing else, there will always will be something missing in your life.

But we have to realize that sources like money can’t always attain happiness or how many followers you have on Instagram, Facebook, or even YouTube. As I said, as someone who has been a Christian for three years, God transformed my life completely, God gave me joy, and meaning, I simply know what the future holds.

I have hope for my life, and I know that God, in fact, is real, and he is with me throughout every day of my life. We have to realize that we are real, this is real life, and God exists in this real-life, meaning that we can have anything we ask him if we ask him with the right motives.

The truth quest is about looking for what is real and true in life, while the happiness quest is about finding fulfillment in life even when things are not so good; notice that these two worldviews correspond to one another; nevertheless, people who call themselves atheists are turning their backs on God whether they think he is real or not, and they choose to live a life that is contrary to God’s law.

I have spoken to many atheists in my life via software called Discord, I realized that majority of people who claim to be atheists don’t even know why they are atheists in the first place, it’s as if they just don’t want God to be real, so they can be free from responsibility.

Atheists respect science as the only thing that can honestly explain reality. Still, I tell you that we can do science because of God. In other words, In the eyes of materialists, the brain is the end product of a mindless, unguided process, where chemicals got together and formed your brain throughout “Billions of years.”

Nevertheless, if the brain is the end product of a mindless and unguided process, why should you trust it, I mean, where does your morality, right and wrong come from, in other words, if atheism is true then it’s your opinion against Hitler’s opinion. And what ability makes doing science possible? Here’s a quote from C.S Lewis concerning this topic:

If you knew that your computer was the end product of a mindless, unguided process, you wouldn’t trust it for a moment, would you? And yet to do your science, you trust something that you believe has come to be without any mind behind it whatsoever.

It’s interesting to know that one of the first people to raise that question was Darwin himself. It’s called Darwin’s Doubt. He said, “With me the horrid doubt always arises whether the convictions of man’s mind, which has been developed from the mind of the lower animals, are of any value or at all trustworthy. Would any one trust in the convictions of a monkey’s mind, if there are any convictions in such a mind?”