Lawless Part 1 – Will America Ever Become A Lawless Nation? 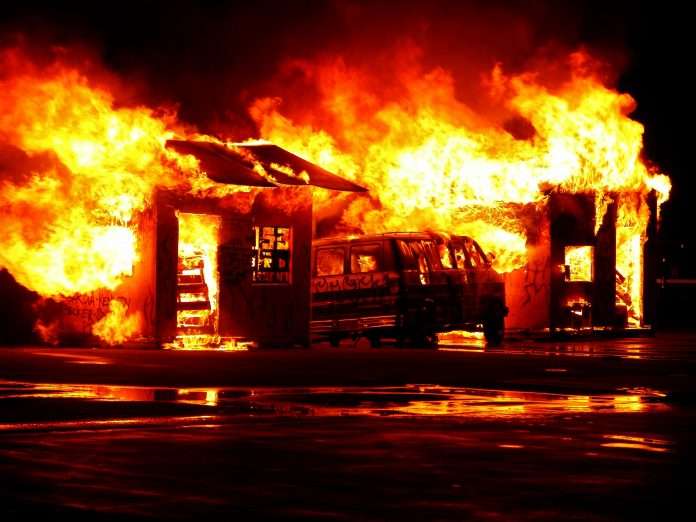 This series offers insight on the potential of our great nation being permanently undermined by forces both within and outside of our control. This first article offers an overview into the reasons why the destruction of America is more than a fantasy pushed by the radical extremes on both sides of the political spectrum. The second article will discuss six megatrends that are contributing to America becoming a lawless nation. The third article will offer Scriptural insight on what America may look like as we approach the End Times. Finally, in the fourth article in the series, we will present a detailed picture of what a broken and lawless nation might look like, offering the Biblical Christian two choices, to either “hide or perish”.

I have spent an extended amount of time researching this subject. Spending, hundreds of hours across all media spectrums, including Scripture. By no means am I presenting what I would consider a highly likely scenario in our lifetime. What I am offering is a thoughtful, logical, and Biblical, view of what could happen. Further, what are our options are as Christians, in the event this scenario comes to pass.

The internet, books, videos, and sermons, are full of wild speculations on the end of civilization as we know it. My reliance is on Scripture, three sets of verses, to be precise. The first is God’s promise that He will never destroy the earth until the end of the age. This should give us some level of peace, even though many believe today that end is near. The second is that Christ told us directly that we should not speculate on when the end will come. The third set of Scriptures suggests that, while we wait, we should be prepared and doing His work in this world.

From a Biblical Christian perspective, we need to recognize that America is likely not found in Scripture, (or, if it is, our country could be the New Babylon). During the End Times, the focus is on Israel, however many other countries are identified as coconspirators in the failed attempts at its downfall. The fact that the current, most powerful country in the world, would seem to have no part in eschatology speaks either to the fact that we are either headed toward a fall or God’s timetable extends beyond our current generation.

Everyone describes the word “lawless” differently. Webster defines lawlessness as “not regulated by or based on law”, “not restrained or controlled by law”. Synonyms include words like, “defiant”, “criminal”, “riotous”, “illicit”, and “mutinous”.  For this article, I am defining lawless to mean a rapid and ultimately complete absence of police and military protection. These are the insular services most of us currently take for granted. The cascading impact of this void would result in a breakdown in the supply chain of food, and, for inner cities, water. There would follow a collapse in financial markets and a loss of the power grid due to inattention. There would be no fire, no ambulance, or other traditional support services that could be depended upon. Americans would be on their own for food, water, shelter, and security. To paint such a cataclysmic “effect”, one needs to offer a clear and cogent “cause”.

Cause Of America’s Final Lawless State

I would offer three broad categories that would present a scenario of lawlessness in this country. They could be termed, Progressive, Immediate, and Scriptural.

Many articles in BCWorldview document the slow deterioration in our nation, framing not only the evidence but also the consequences. The loss of freedoms, media bias, riots, the loss of a Biblical Christian worldview in our post-Christian nation all play into this trend. Further, climate change, drug legalization, pandemics, the dismantling of our laws, persecution, wasteful governmental spending, socialism, liberalism, social media censorship, etc. add to our deterioration. Even today, as we live in the most successful nation in the world, the list can go on and on.

Looking broadly at what could happen, based on the trends we have witnessed over the last ten years, a continued, slow march toward the collapse of America is certainly a possibility, however remote. This would involve a combination of two or three factors from the list below. It would result in a domino effect from which America would likely not not recover for decades to come.

Rather than being a slow progression into chaos, there can be specific events that drop us into lawlessness much more rapidly. In the past, the theme of this type of chaos took the form of nuclear war. Currently, the US, Russia, UK, France, China, India, Pakistan, and perhaps, North Korea and Israel have demonstrated/stated nuclear capability. More nations are working toward that end. Provocation by a diplomatic miss-step or miscalculated aggression by any one nation could create a wave of apocalyptic destruction. Further, satellites and their ground-based surrogates play an exclusive role in early warning. Cyberwarfare could either falsely initiate or hide a pending attack, sparking unnecessary retaliation. What has kept us comparatively safe over the decades, since Hiroshima, is the concept of “mutually assured destruction”. However, there are new players in the market whose ideology may supersede their need for survival.

There also exists a much more effective and targeted alternative to direct nuclear war.

Finally, there are other destructive events beyond the nuclear, cyber, and GMD options. We could have a meteorite hit the planet, a huge earthquake, a tsunami, or other natural occurrences that tip the scales of our fragile world. And, let’s not leave out an alien invasion for those who believe in such things. As we evaluate the likelihood of any of these events, consider reflecting on how you would have responded if someone tried to explain the long-term impact of COVID.

Many Christians believe we are living in either the labor pains (Matthew 24:28, 1 Thessalonians 5:3) or the End-Times itself. We need to recognize that at some point Christ is going to return. For the Biblical Christian, the timing of the Rapture will become more significant if the trends, mentioned earlier, continue.

Beyond the labor pains are the judgments God will press on the earth. Sores, water into blood, scorching of the planet, darkness, earthquakes, 100lb hailstones, and plagues, are all part of the picture painted by our Bibles. From the Old Testament, Ezekiel 36-39, Daniel 7-12, Zechariah 14, Malachi 4 and from the New Testament, Matthew 24-25, John 14, 1 Corinthians 15, 1 Thessalonians 1, 4-5, 2 Thessalonians 2, 2 Peter 3 and the book of Revelation, all testify to what God has in mind. A mid-tribulation or post-tribulation scenario means Christians will have to deal with many of these judgements (even if protected to some degree).

If America becomes lawless, should Christians hide or perish?

So to reflect on what has been presented, what would happen if there is a total breakdown in our country? In the ability of our local, state, and national government to enforce the constitution and our system of laws? What should/would Christians do? Should we hide, like Mormon preppers, or should we help our neighbors and friends, and ultimately perish? I would suggest that there are no other options and no middle ground. In the concluding article of this series, we will better define what America would look like as a lawless nation. We explore the two choices Biblical Christians have if the End-Times have truly begun, and until, we are Raptured out of this world, as true citizens of Heaven (Philippians 3:20-21).

A Drive To Church