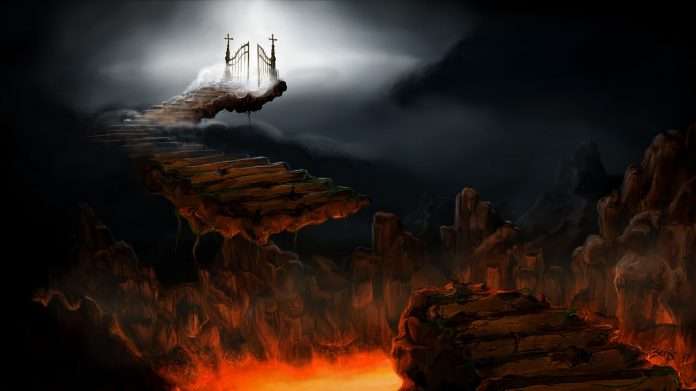 The possibility that God would be present in Hell challenges our preconceived notions, both of who God is and what Hell will be like. Many naturally believe that part of the torture of Hell is the total separation from God. However, there are verses which contradict this view.

God will be resident in Hell

God will NOT be present in Hell

If one believes that the Bible is without error then we must reconcile the verses above on the question of whether God will reside both in Heaven AND Hell. Note the words in bold above. If God is omnipresent, how can one ever be sent away from His presence?

One writer offers an explanation of this apparent paradox by saying “These verses are best reconciled, in my view, by recognizing that judgment consists in being excluded from God’s presence as the source of all blessedness, but not from God’s omnipresent lordship.” This author is trying to make the point that even though part of the punishment of Hell is the exclusion of God’s presence, God still holds lordship (control) over the lost while apart from them.

Though an interesting perspective, this interpretation still leaves one uneasy with the clear words “in the presence of” from Revelation 14 and the accepted view that God exists everywhere (omnipresent).

Another writer, well versed in the underlying Greek, presents what I consider a more complete explanation of these verses. Without going too deep into the original text, the Greek for “presence” in the Revelation passage refers to a spatial or physical presence. As such, it can be interpreted as God is physically present in Hell. From the verses in Psalms and Proverbs one would conclude that God and the angels are physically present as the punishments of both Hell and its precursor, Sheol, are applied to the lost.

The Greek word for “presence” used in 2 Thessalonians refers more to a complete loss of fellowship. In other verses, this Greek form is used to describe the turning away of the “face or outward appearance” from another. In that sense God has turned away the “presence” of His fellowship and blessings with those in Hell.

Will God be in Hell? – The simple answer is yes. He will witness the punishment of the lost, but not be in fellowship with them.

The Bible is without error in its original form. What we hold today is 99.9% of what God penned through man as both a love letter to those who are seeking His grace, and a warning for those who continue out of His will. There is no question that we, as mere humans, can, at times, have difficulty both reconciling verses which seem contradictory as well as accepting concepts such as a literal Hell juxtaposed against the attribution of God’s love for mankind. However, it’s important to remember that He is Lord and we are not. Faith comes from trusting that God’s omnipotence and judgments will be more than justified once we see more clearly on the other side of the grave (1 Cor. 13:12).

Social Med Ban – What is the Fix